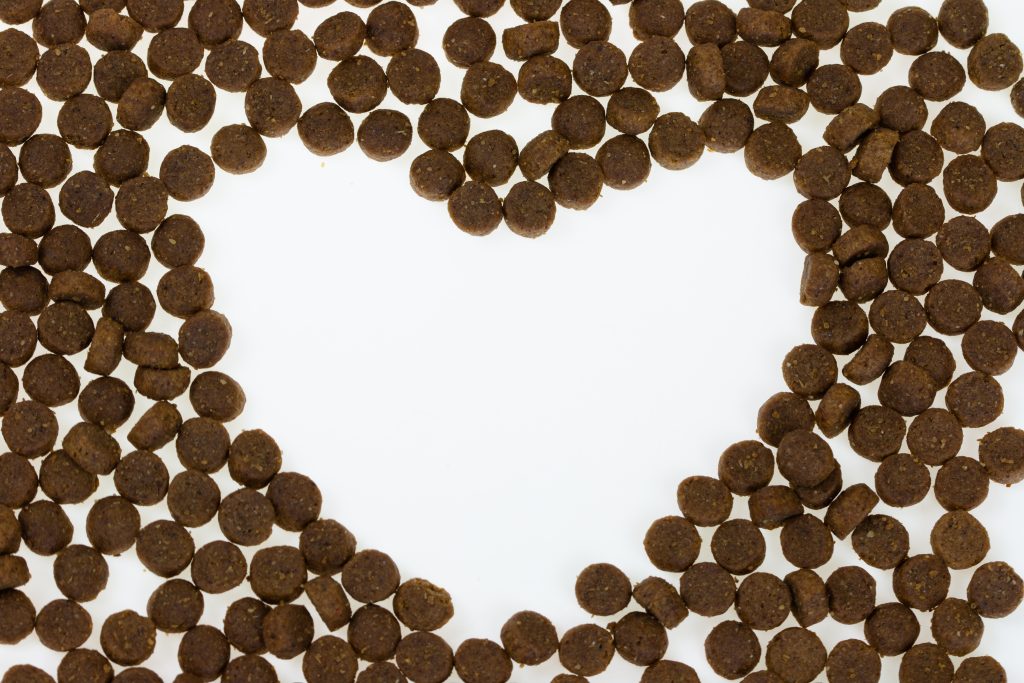 There have been some concerns over a recent report released by the FDA that suggests a grain-free diet may cause your pet to get Dilated Cardiomyopathy (DCM). At RuffMutts first and foremost we care about the health and happiness of your pets.  We also recognize that there is a lot of conflicting information on what is good and not good for your pets.  What we can promise is that we would never sell a pet food that we would not be confident in feeding to our own pets.  That is why we only sell quality pet food, that does not contain inferior ingredients such as wheat, soy, corn, meat by-products, unidentified meats etc.  We carry quality raw pet food, grain-free kibble, canned products and kibble with quality grains.

Some key facts must be considered when looking at the FDA report on DCM:

The FDA makes this statement.  “The prevalence of reports in dogs eating a grain free diet might correlate also to market share: these products have become exceedingly popular over the last several years.”

It’s reasonable to believe that the numbers shown in Table 1 are nothing more than a reflection of market share. The vast majority of the 77 million dogs in the USA are being fed a kibble diet.  This risk of DCM from kibble food could be as low or even lower than a tubbed or semi moist diet.  You need to have an idea of the market share to make an educated decision on if a type of pet food has a higher chance of causing a specific illness.

When looking at Table 2 its important to recognize that Acana and Zignature are two of the biggest sellers of pet food in the USA. The fact that these numbers are provided without an indication of their market share makes it impossible to make any determination as to whether these diets cause an increased risk for DCM. Similarly, not illustrating brands that were associated with DCM but only had nine or less cases, is also short-sighted. If brand X has nine cases associated with DCM but only accounts for a very small percentage of the market share, that brand could in fact have a much higher risk associated with DCM. 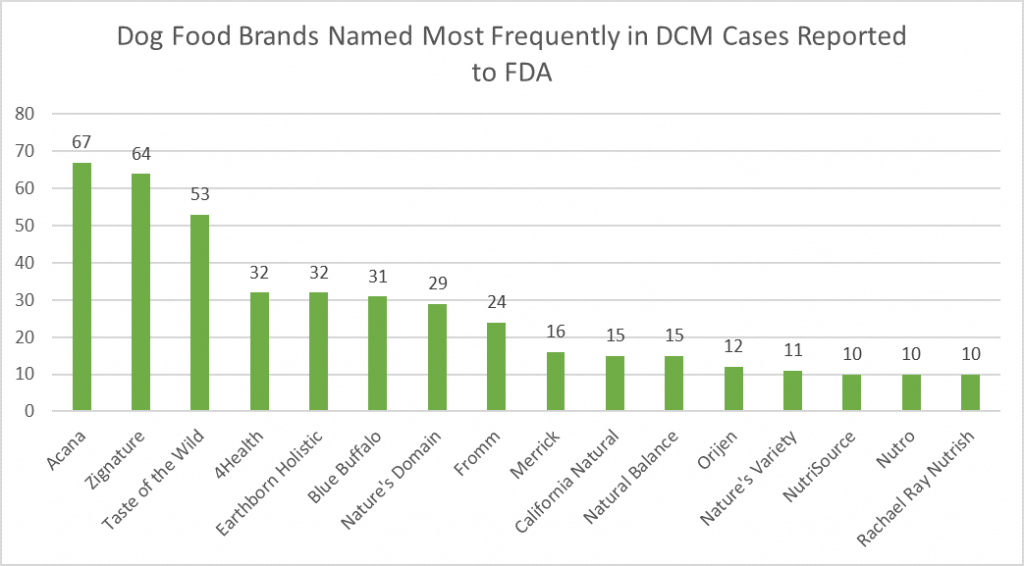 2. Breeds Noted to Have A Genetic Predisposition to DCM

The FDA reports states this: “Dilated cardiomyopathy is recognized as a genetic condition in dogs, typically in large or giant breeds, such as the Doberman Pinscher, Great Dane, or the Irish Wolfhound. It is also seen in Cocker Spaniels associated with taurine deficiency.”  Other Veterinarian clinics list Golden Retrievers and other large breed dogs as having a genetic predisposition to DCM.

“From 2014 – 2019 (4/30/19) 515 dogs were reported to have DCM in dogs not genetically predisposed to DCM.  That shows 1 in 148,362.235 dogs had DCM that did not have a genetic predisposition.  Despite that statement when you look at the “Dilated Cardiomyopathy in Dogs & Cats: Complaints Submitted to FDA-CVM” list, 150 or almost 30% of the cases are dogs known to have a genetic predisposition to DCM.  Take out those 150 cases then it drops to a 1 in 210,958.904 chance.   To put that in perspective you are 70 times more likely to be struck by lightning.  Below are cases that involved some of the breeds with a genetic predisposition to DCM  (keep in mind there are many “unknown” breeds and other large breeds on the list that would make it even more unlikely to get DCM):

Table 3 shows the the meat proteins in diets associated with the reported cases of DCM.  Most kibble pet foods include chicken so its not surprising to see chicken as the most prevalent meat protein in the reported cases provided by the FDA.  This is again a reflection of market share not an indication that feeding your pets chicken will increase their chance of getting DCM.

Within the document “Dilated Cardiomyopathy in Dogs & Cats: Complaints Submitted to FDA-CVM January 1, 2014 – April 30, 2019”, there is a higher ratio of foods containing Lamb and Kangaroo that were associated with DCM compared to similar recipes with proteins like chicken or pork. Lamb and kangaroo are known for having low taurine levels, but pet food manufacturers have added taurine to compensate for that.  Despite this, of the  520 reported cases 145 of them were diets that included lamb or kangaroo.  That’s over ¼ of all reported cases that the FDA chose to provide (90 – Lamb, 55- Kangaroo). 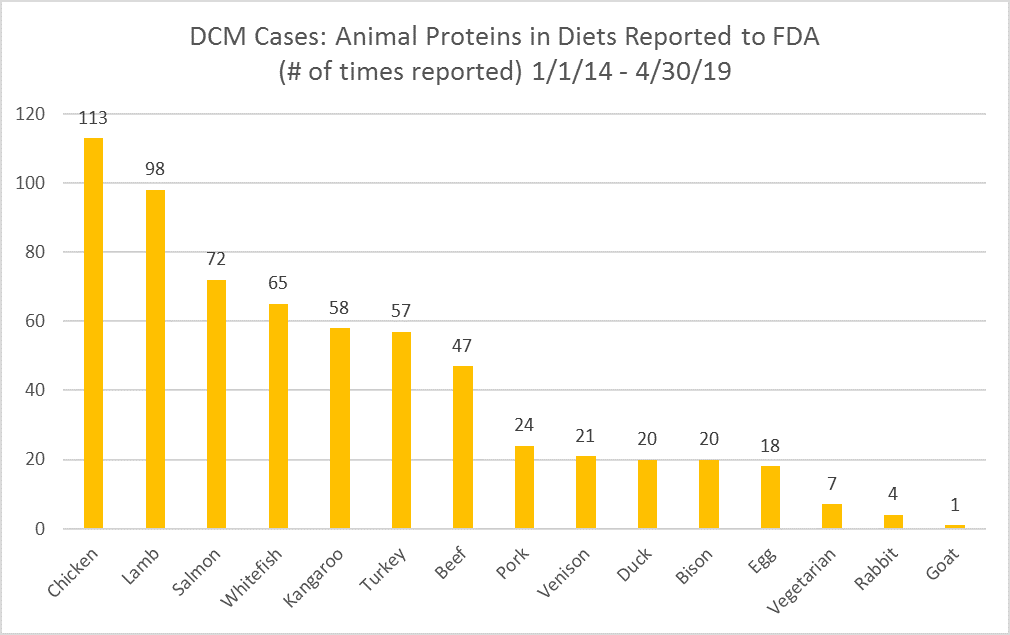 However, to put that into context the FDA report tells us there are over 77 million dogs in the USA and of those, 145 of them had DCM while on a kibble diet that was predominantly Lamb or Kangaroo. That equates to a percentage of .000188 of dogs getting DCM while on a diet in which the primary meat protein is lamb or kangaroo. We carry a few kibble formulas that have lamb as the primary meat ingredient and some canned kangaroo products. Despite this very low percentage, staff have now been advised to point out to anyone who is going to purchase either Acana Singles Grass-Fed Lamb or Pulsar Lamb, that there may be a small correlation with pet foods that have lamb as the predominant ingredient in dogs that have a genetic predisposition to DCM.

Orijen – Simply put Orijen is one of the best kibbles available on the market. The superiority of Champion Pet Foods was on display during our tour of their kitchen just outside Edmonton.  Their outstanding whole ingredients, quality control and cooking processes are the best in the industry.

Orijen is listed as being part of a dog’s diet 13 times in the Dilated Cardiomyopathy in Dogs & Cats: Complaints Submitted to FDA-CVM January 1, 2014 – April 30, 2019 report.

Four of the 13 cases provided by the FDA included a diet other than Orijen and five of the 13 cases were associated with dogs that have a known predisposition to DCM and another five dogs were unidentified breeds. The FDA report does nothing to demonstrate that there is an increased risk of dogs getting DCM from an Orijen diet regardless if they have a genetic predisposition or not.

Acana – As indicated previously Acana was named in 67 cases and as discussed Acana is one of the top selling pet foods in the USA. Of the 67 DCM cases that had Acana pet food associated with it, nine were on a diet that included other food not produced by Champion Pet Foods (Acana or Orijen).  26 of the 67 cases included a predominantly lamb diet from Acana or another brand that was part of the diet, 36 cases (almost 50%) included dogs that have a genetic predisposition to DCM and another five were unknown breeds.  When you look at the details it’s apparent that the report does nothing to demonstrate that Acana, or any other brand for that matter, is causing an increased risk of dogs developing DCM.

5. RuffMutts Cares About the Health of Your Pets

RuffMutts sells Acana and Orijen and will continue to do so with confidence.  If at any time, there is any scientific evidence that anything we sell is unsafe for pets, we will stop selling it.  If we find that there is a chance that something we sell could be harmful to pets we will at the very least make people aware of it.

Therefore, we will speak to people about a predominantly lamb diet and the very low risk (.000188%) of feeding it to a dog that may have a genetic predisposition to DCM.  You may ask why the FDA would release a report as incomplete and unscientific as this one.  The fact is that the pet food industry is a multi billion-dollar industry and large American companies can often influence headlines.  Once you look at the facts though you will often find those headlines to be misleading, if not outright incorrect. Some valid points are brought up in this article for those that want to learn more about some of the issues associated with big American companies and their aim to control as much of the pet food market as possible. BAD SCIENCE AND FINANCIAL CONFLICTS OF INTEREST PLAGUE THE FDA’S INVESTIGATION INTO “GRAIN-FREE” PET FOODS AND DILATED CARDIOMYOPATHY.

The loss of any pet for any reason is tragic. We would hope that the FDA will one day investigate issues such as cancer and how diet impacts it. It has been reported that up to 50% of dogs over the age of 10 years will die of cancer-related problems.  As many as 1 in 4 dogs and 1 in 6 cats will develop cancer at some time in their life. Understanding how diet correlates to these cases would be valuable to almost all pet owners.

Below is the Hierarchy of pet foods that includes much of what we sell here at RuffMutts. We are very selective in what we stock, and only bring in the best pet food available at each price point. If you want to feed your pets a healthy raw pet food, we carry that, want quality grain free kibble, we have that, if you want a kibble with quality grains at a great price, we have that as well. We do not however, carry foods that include inferior ingredients such as brewers rice, corn, soy, wheat and meat by-products or carry foods that have quality control issues.

Still concerned about your pet’s food? We now carry Nature’s Logic Distinction which is free from potatoes, sweet potatoes, tapioca or peas. Available in Pork, Beef or Chicken. Visit us in-store for a sample today!

Monday – Saturday Hours vary. By appointment only. Please call ahead.

Get on our VIP (Very Important Pet) list to receive advance notice of special offers and goodies for your pets!

Sign up today to be informed of our sales and to receive special offers and deals.